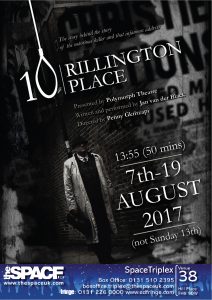 My latest one-man show will premiere at Edinburgh Fringe 2017. It’s directed once again by Penny Gkritzapi, and with 10 Rillington Place I’m taking a different look at a story that has previously only been partly told.

Set between the condemned cell at Pentonville Prison in July 1953, and the flat at the infamous address from 1943 to 1953, the show examines the psyche and the soul of the notorious killer, John Reginald Halliday Christie.

Although forever associated with the tragic case of Timothy Evans, Christie was responsible for at least 8 murders and this play examines his motivations, his own admissions and the circumstances and activities that led him to the condemned cell.

A cunning and manipulative character, Christie was able to commit an unknown number of murders during a life in which a veneer of respectability covered another character, rooted in some of the seediest streets and alleys of London and peppered with both petty crimes and more sinister activities.

By the time Christie was reunited with his estranged wife Ethel, he had already sunk into the grubbiness of what was then one of the poorest ares of the city. Prostitution and petty crime fascinated him, as did his almost lifelong obsession with death. He was well known in the area as a slightly peculiar figure on the edges of the underworld, while maintaining a facade of ordinariness.

The arrival of Ethel Christie sparked a new venture, the procurement of abortions. Although Christie was later to use his supposed expertise in the process to lure desperate women to his flat, in fact it was Ethel who was the abortionist – Christie himself was the go between. He was well known to local prostitutes, and to some extent trusted by them. As a wartime policeman, he also used his position to obtain “favours” from the same women.

Nobody knows exactly how many murders Christie committed. He eventually confessed to killing 8 women, including both his wife, Ethel, and Beryl Evans (he later withdrew his confession with regard to Beryl Evans) over a period of approximately 10 years. There is little doubt that there were other victims, and Christie himself hinted during psychiatric interviews that there could be many more.

Contrary to popular belief, Christie never admitted – and in fact vehemently denied – killing Timothy Evans’ daughter Geraldine, the murder for which Evans was tried, convicted and executed. This fact, years later, led to the bizarre official conclusion that although Christie had murdered Evans’ wife, Evans himself had killed his own daughter at the same address using the same method. Eventually, even British officialdom could not support such a ridiculous conclusion and Evans received the pardon that was so long overdue.

Christie had already killed several times before the Evans family arrived at Rillington Place, and went on to kill several times more after Evans’ conviction and execution. Drawing on transcripts from trials, medical reports on Christie and other respected source materials on the cases, I tell the story behind the story of one of the most sinister killers in British criminal history.