Filming at St Bart’s. Looks like we were in good company… 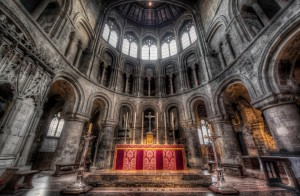 The High Altar: part of the Book of the Dead set

I just spent a few days filming for a new silent movie called “Book of the Dead”, directed by Hannah McKibbin, in the oldest church in London. St Bartholomew the Great, (http://greatstbarts.com/index.html) fondly known as St. Bart’s, began life as an Augustinian Priory in the 12th Century. Now it’s an incredibly well-preserved working church, beautiful, inspiring and it’s the kind of place that makes you speak in a hushed voice, the moment you step inside.It seems we were in good company.

St Bart’s has long been a favourite location for film and TV companies – films like “Four Weddings and a Funeral”, “Robin Hood: Prince of Thieves”, “Shakespeare In Love”, even “Muppets: Most Wanted”, among a host of others. Rumour on our set had it that Tom Cruise would be there the following week.

St Bart’s is on most of London’s film and TV bus and walking tours, it’s a gem, hidden away from the bustle of Smithfield Market which is practically next door. If you didn’t already know where the church is, you’d never dream it was there, tucked away in a back street.

At the moment it’s playing host to a Damien Hirst sculpture of the Flayed Man, in 24 carat gilded bronze. Stunning.

The church is open for visitors most days, when it isn’t being used for filming, and also has a nice cafe in the cloisters. It’s a 5 minute walk from Barbican or Farringdon stations, and well worth a look.